The following features were introduced or enhanced in LoadRunner Cloud version 2020.10. 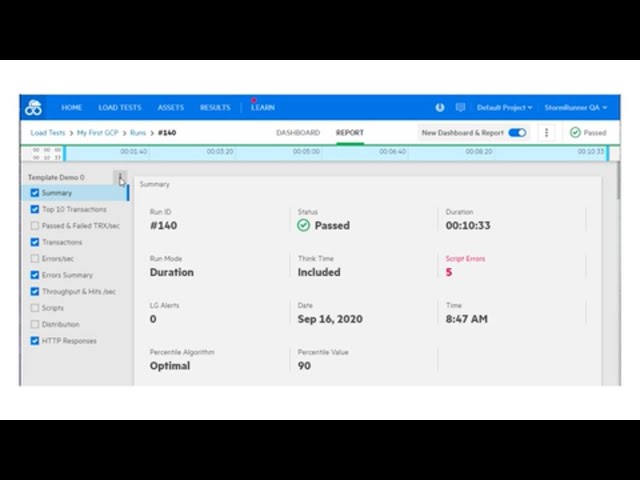 An additional cloud vendor Google Cloud Platform is now supported. Now you can select Ashburn, Virginia as a new region for your cloud load generators.

An additional location was added for Azure cloud load generators:

Beta support was added for report templates. Create templates for your test reports and use them across several runs and tests as a shared asset.

A new beta capability was introduced to LoadRunner Cloud, that allows you to stream aggregated or raw data to an on-premises time series database. To activate this feature, open a support ticket.

The optimal percentile calculation based on the T-Digest algorithm is now available for all tenants. This feature also lets you recalculate the percentile for Transaction Response Time after a run, by allowing you to specify a custom percentile from 1 through 99.

A new option lets you exclude think time from the calculation of the transaction response time.

Scripts can be viewed and now also edited from within the LoadRunner Cloud interface. To activate this feature, open a support ticket.

For more details, see Edit and view scripts from within LoadRunner Cloud.

Now you can use the pause scheduling capability when running your tests with VUH licenses.

The General tab for load tests has been redesigned with options divided into logical categories, allowing easier navigation.

The Notifications pane has been redesigned and separated from the Export area, making it easier to read and act upon the notifications.

For more details, see Export notifications and Manage scripts in your Git repository.

The following common operations can now be performed with the public API:

OneLG, the OPLG (on-premises load generator) installer, has a new update mechanism for upgrading your OPLGs. You no longer need to remove existing OPLGs before upgrading nor do you need to restart your machine after the upgrade.

A silent installation is available for the on-premises load generator installer, OneLG.

A new combined Linux Docker image is available for the on-premises load generator installer, OneLG, for all of the LoadRunner family products. This image can be used instead of the images provided in releases prior to 2020.10.

Note: In future releases, the former Docker images will be deprecated.

For more details, see Deploy a Docker container for Linux.